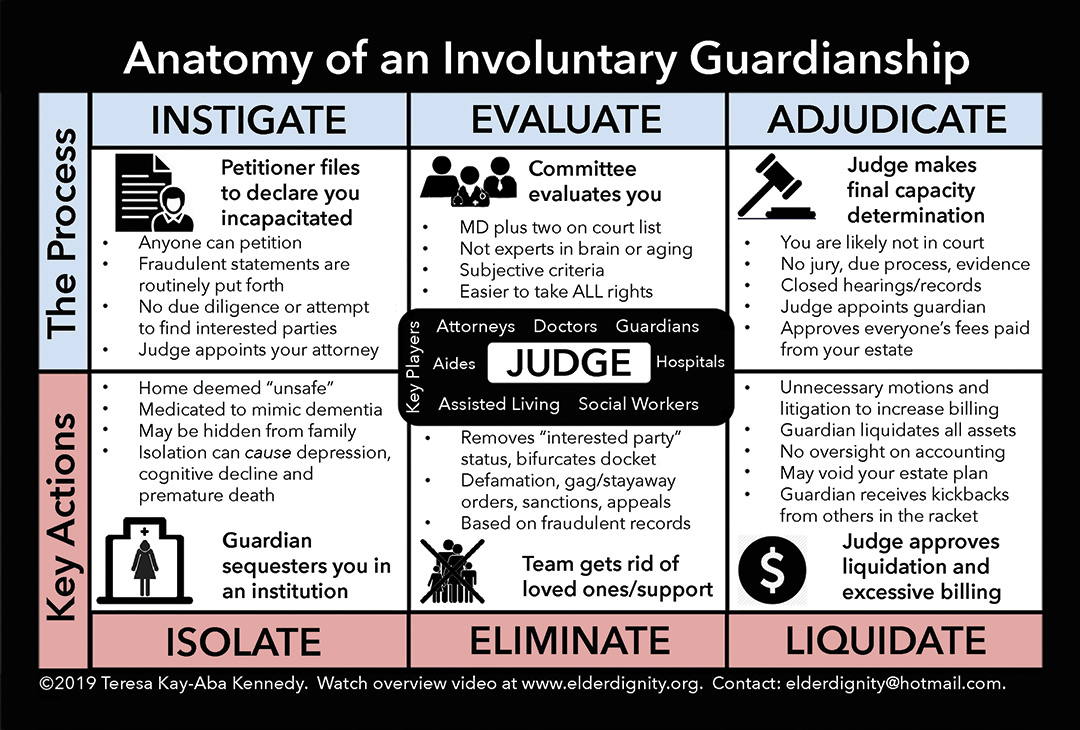 The Anatomy of an Involuntary Guardianship

Guardianship laws intended to protect the vulnerable are being used to entrap unsuspecting people to control their property. For court insiders who know how to manipulate the system, it is an easy and lucrative crime. A rogue guardian, who has the ability to make decisions for you, can wipe out all of your assets and destroy your life with no recourse. So, how does an involuntary guardianship come about?

1) INSTIGATE – A Petitioner files to declare you incapacitated. In most states, anyone can petition. There is no due diligence on the motive or allegations. Fraudulent statements are routinely put forth. There is also no attempt to find interested parties like family. Suddenly you have a court-appointed attorney and you are an Alleged Incapacitated Person (AIP).

2) EVALUATE - An examining committee, of usually three people, is appointed from a court-approved list. They are commonly not experts in neuroscience or aging. The MD could be a gynecologist determining that you have dementia because you did not know the exact amount of your mortgage. The evaluation criteria is subjective and it’s easier to take away ALL rights than to have to defend the removal of one or two.

3) ADJUDICATE – The Judge makes the capacity determination sometimes without meeting you. In a court of equity, there is usually no jury, due process or rules of evidence, and everything is kept quiet with closed hearings and sealed records. Based on the evaluators report, a Judge appoints a limited or plenary guardian. You are now a WARD. Everyone’s fees are paid from your assets.

The Judge can take away rights such as to marry, vote, drive, sue, contract, manage money, decide where to live and even to choose with whom to socialize. With a court order, the guardian can also commit you to an institution, file for divorce, and consent to experiments, sterilization, abortion, and termination of parental rights.

Just about anyone can become a guardian. There is no formal education or licensing. With 40 hours of training, a guardian can charge $85 or more an hour—upwards of $200 to $500 an hour if the guardian is an attorney. In some states, convicted felons have ended up as professional guardians.

There may be some professional guardians out there that legitimately help, but guardianship by design is oppressive. It removes self-determination and all fundamental rights rendering you a non-person. Former Congressman Claude Pepper famously said:

The typical ward has fewer rights than the typical convicted felon… It is… the most punitive civil penalty that can be levied against an American citizen, with the exception, of course, of the death penalty.

If you have a rogue guardian, there are often three key actions used to fully take over your estate:

1) ISOLATE – The guardian sequesters you in an institution. Your home is fraudulently deemed “unsafe” and you may be medicated with psychotropic drugs to mimic dementia. You could even be hidden entirely from your legitimate family and told they have abandoned you. It is psychological torture. Isolation from family can cause depression, cognitive decline and premature death.

2) ELIMINATE – The team gets rid of anyone fighting to defend you. The Judge may remove your selected person and their “interested party” status so they have no standing in court and have to pay legal fees out of pocket. They bifurcate the docket so your defenders can’t see or question what is going on, use defamation, stayaway and gag orders, as well as drain funds with sanctions and appeals that could cost $50,000 each. Any appeal will be based on the fraudulent records, and if your loved one runs out of money and has to start writing motions, then you’re really at a disadvantage.

3) LIQUIDATE – The Judge approves excessive billing and liquidation. All the players take unnecessary actions and create conflicts to increase billing. One motion may cost you $2,000. In the name of protecting you, the guardian liquidates ALL of your assets to pay everyone’s fees. There is no real oversight on accounting and even your estate plan can be voided.

The result is total entrapment. The legal system is being used as a weapon against you and you’re literally paying for it. Your estate becomes a cash cow.

There is a whole ecosystem supporting the exploitation ensuring the desired incapacity results, appointments and court orders. The guardian may hire professionals and change procurement of things like medical supplies to partners. Most of the actions are enabled through a Judge’s signature. According to advocates, the predators have spotters—lawyers, doctors, nurses, social workers, home health aides, bank managers and others who are induced to refer people into the system.

Once you’re in, there is usually no way out. The target often dies mysteriously, or is left penniless. It is a vicious human rights violation. The case of Dr. Lillie Sykes White is an example. She has been isolated from her core family for over 1,584 days*--over four years--and the court is simply ignoring communication and visitation motions even though she stated multiple times she wants to speak with and be with her sister and nieces/nephews.

Time will tell how it ends for Lillie. Even if she is reunited with her family, she would have lost precious time and her hard-earned retirement funds. The American Dream has been stolen from her even though she has done nothing wrong... and it's all being "made legal" through a Judge's signature. In his "I Have A Dream" speech, Dr. Martin Luther King, Jr. spoke of "security of justice." Unfortunately, there is no "security of justice" in the adult guardianship system so you must protect yourself.

Watch The Deception of Protection. 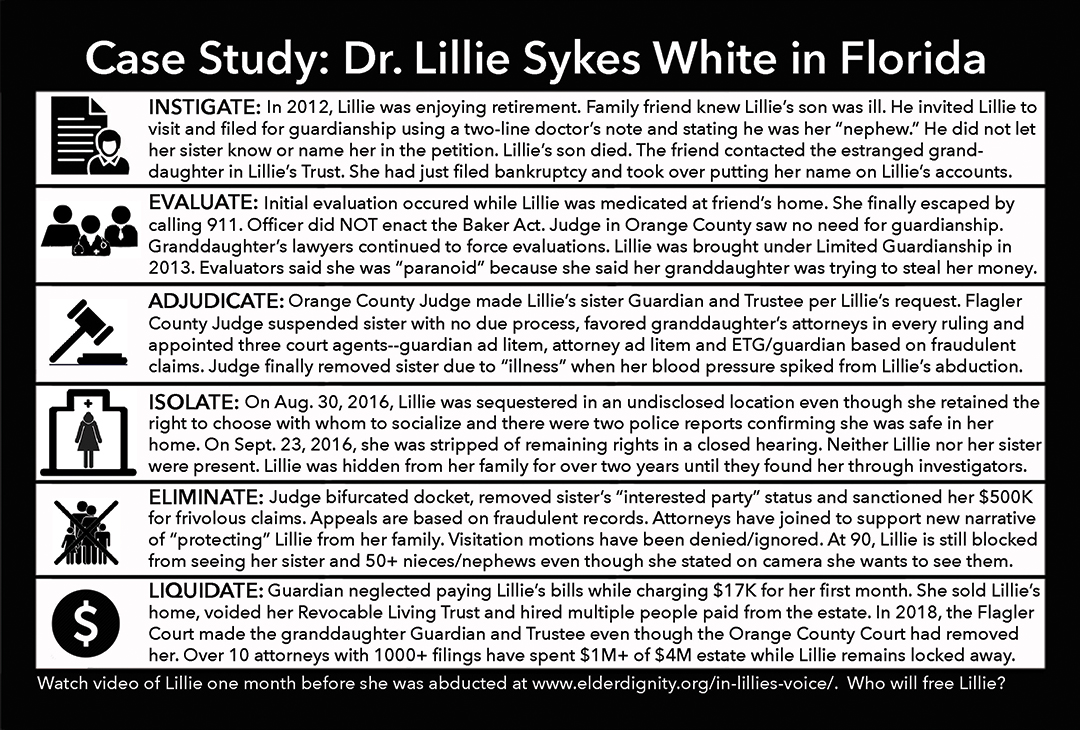 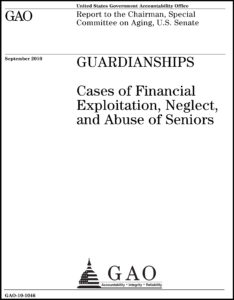 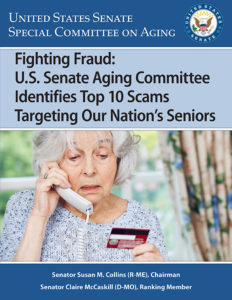 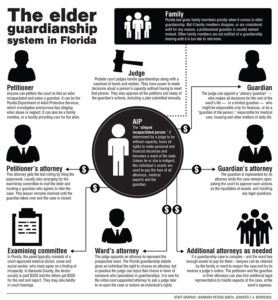